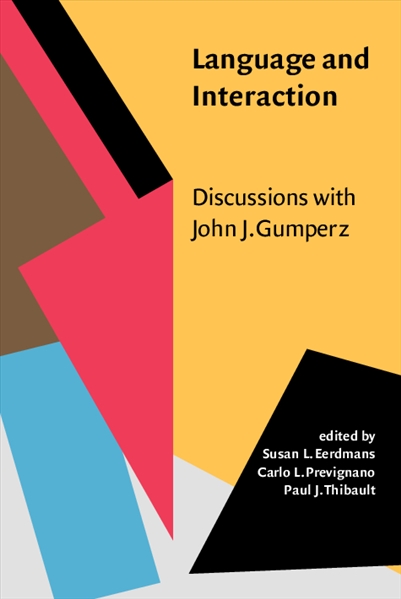 This book features a fascinating and extended focal interview with Professor John J. Gumperz, who ranges over his long career trajectory and reflects on his scientific achievements and how they relate to the contemporary linguistic scene. In this way, the reader is presented with a snapshot introduction to Gumperz's work in a contemporary context.

A number of commentaries provide a stimulating and illuminating series of theoretical and applied encounters with Gumperz's work from different perspectives. In so doing, they shed new light on Gumperz's seminal contribution to the study of language and interaction. In his Response Essay and in a final discussion, Gumperz clarifies his views on many of the topics discussed in the volume, as well as sharing with readers his views on some other approaches to language and interaction that are closely aligned to his own.

John J. Gumperz, Professor Emeritus of Anthropology, University of California, Berkeley, is one of the founders of Sociolinguistics whose early work on speech communities and on the relationship of linguistic to social boundaries helped lay the basis for much current work in the field. Since the 1970s he has concentrated on a theory and methods of discourse analysis that can account for the intrinsic diversity of today's communicative environments.

The Divine Comedy and the Encyclopedia of Arts and Sciences Paperback

Learning and Hatred for Meaning

The Joy of Grammar Paperback

Syntax An Introduction Volume I Paperback

Context as Other Minds Hardbound