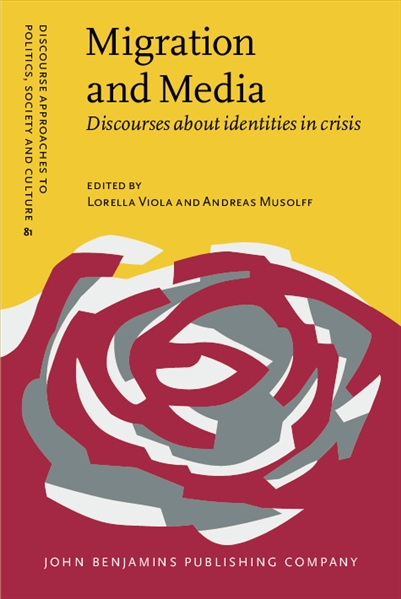 The socio-discursive landscape surrounding the migration debate is characterised by a growing sense of crisis in both personal and collective identities. From this viewpoint, discourses about immigration are also always attempts at reconstructing the threatened 'home identity' of the respective host society. It is such attempts at reasserting identity-in-crisis (due to migration) that are the focus of the volume Migration and Media: Discourses about identities in crisis. This is a four-part book which explores a range of representational strategies used to frame migration as a crisis of identity. It features fourteen case-studies of varying sets of data (print media texts, TV broadcasts, online forums, politicians' speeches, legal and administrative texts, oral narratives), drawn from discourses in a range of languages - Croatian, English, French, German, Greek, Italian, Lithuanian, Polish, Russian, Serbian, Slovenian, Spanish, Ukrainian -, and employing different discourse-analytical methods, such as Argumentation and Metaphor Analysis, Gendered Language Studies, Corpus-assisted Semantics and Pragmatics, and Peroxidization Theory. Such a diverse range of sources, languages, and approaches provides innovative methodological and theoretical analysis on migration and identity which will be of interest to scholars, students, and policy makers working in the fields of migration studies, media studies, identity studies, and social and public policy.

The Discursive Construction of the Scots Language...

The Great American Scaffold Intertextuality and...

From Text to Political Positions

Sociolinguistics of Style and Social Class in...

Gender, Language and Ideology A Genealogy of Japanese Women's Language

Follow-ups in Political Discourse Explorations Across...

Sociology of Discourse From Institutions to Social Change

Dialogue in Multilingual and Multimodal Communities

Discourse, Identity and Legitimacy Self and Other in...

Studies of Discourse and Governmentality

Redefining Trial by Media Towards a Critical-forensic...

A Gender-based Approach to Parliamentary Discourse The...

Anti-racist Discourse on Muslims in the Australian Parliament

From Text to Political Positions

Follow-ups in Political Discourse Explorations Across...

Sociology of Discourse From Institutions to Social Change

Discourse, Identity and Legitimacy Self and Other in...

Studies of Discourse and Governmentality

Redefining Trial by Media Towards a Critical-forensic...

A Gender-based Approach to Parliamentary Discourse The...

Anti-racist Discourse on Muslims in the Australian Parliament

Representing the Other in European Media Discourses

The Discursive Construction of Class and Lifestyle

Crisis and the Media

Words of Crisis as Words of Power

The Discursive Construction of Identities On- and Offline